Thanks for quoting me, Quote Library!

Thanks, Quote Library, for posting my Find Me quote on Tumblr. Since posting it 3 days ago, over 330 people have already either reposted it or “liked” it on Tumblr! And that staggering number is sure to climb in the days to come.

“If someday you should ever think of me and miss me, know in your heart that I’d want you to find me once again. No matter how distant in time or space… FIND ME.” — Sebastian Cole, author of Sand Dollar: A Story of Undying Love

I find it really flattering that more and more people are quoting me on their website pages. The funny part is that many of them have probably never heard of me or my book. They’re simply sharing what they’ve come across online that has a profound meaning to them. When I wrote the book, I had no idea that this would happen! Here’s what I’ve stumbled upon so far:

Living Your Dream – Now! (This one is the most touching. My heart goes out to you.)
A tribute to Linas “Len” Radys (Unusual place for a quote, but with plenty of sentiment)
thewatercooler-evamiranda
New Castle News (Such a touching story)
Rochman on Facebook (Beautiful song, too)
Dominus Quotes
Kamali Studios
Experience Project
WELCOMETOSUCCESS
Sharon Gaughan at Twitter
Suddenly… on wattpad
Diana Garnand on Google Plus
chatterboxbrit at tumblr
hey-its-a-new-day at tumblr
ynnahcorn at tumblr
Literature is My Utopia (299 Likes, 53 Shares)
Amy’s Army (A tribute to Amy Winehouse)
Lessons From on Facebook
OMG Samoan Love Stories on Facebook (From Samoa)
Kasozi Henry on Facebook (From Uganda!)
Quotes & Notes on Facebook
EuniAce28 on Facebook

The One Who Got Away

I remember — I love you

All That Really Matters

If you know of any others, I’d love to hear about them so I can add them to this list.
To read more of my quotes, click here. 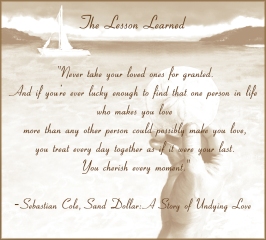