Posts tagged “The One That Got Away”

“I’m trying to remember if there ever was a book like Sand Dollar that I read and as soon as I was done with it [I’m talking mere seconds after] that I just wanted to shout to the world and beg people to get it ASAP… come to think of it, it probably happened on one or two occasions, but right now I don’t have the time to ponder when or which book it was, BUT I do have the time to tell you why I think you should find the time to read this story.”

Click here to read the rest of bookworm2bookworm’s review

October 24, 2012 | Categories: Reviews | Tags: Books, fiction, love, Love stories, love story, Nicholas Sparks, romance, Romantic novels, The Notebook, The One That Got Away, the one who got away | Leave a comment

Similar to a Nicholas Sparks Novel, But Uniquely Different

With each new twist that’s woven into the plot comes a new revelation about the heroine’s past, an element of suspense that makes it difficult to put the book down. Similar to a Nicholas Sparks novel, but uniquely different, Sand Dollar: A Story of Undying Love is a thought-provoking, emotional read that, among other things, might even have you yelling at the main characters at times. Unlike your typical fairytale romance, the characters in Sand Dollar have real-life issues that must be dealt with. As in real life, things rarely go according to plan, and all too often it’s the ones we love the most who end up hurting us the most. A mixture of joy and heartache, this realistic portrayal of life is what sets Sand Dollar apart.

When the story opens, Noah, who is old and sick in a hospital bed, tells of his undying love for his soul mate, his one true love, Robin, who also happens to be the one who got away. The story is told from Noah’s point of view with two timelines: when he’s old and when he’s young. Eventually, these two timelines intersect with a surprising plot twist, and the story moves forward from there with the most beautiful of endings – an ending that you’ve just got to read for yourself.

October 16, 2012 | Categories: Menu Item | Tags: Books, Emotional Read, Epic Novel, heart, love, love story, Nicholas Sparks, romance, soul mate, tearjerker, The Notebook, The One That Got Away, the one who got away, true love | Leave a comment 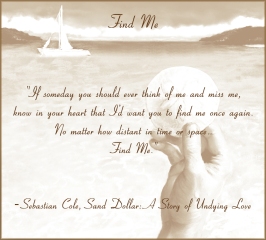