“Congratulations Mr. Cole! Your debut novel, SAND DOLLAR: A STORY OF UNDYING LOVE, is a winner. And I’m a winner too! I won this book as a Firstreads Giveaway. SAND DOLLAR is a wonderful tale of love and so much more. Noah Hartman~~what a perfect name for a man who follows his heart~~spent his life searching for his soul mate. He found her in Robin. If only Robin could find her way to back to him. As eighty-year old Noah from his hospital bed tells his story to Josh, a very special orderly, we learn of a love that will never die. Well done. I enjoyed reading this story written from a man’s perspective. Genuine. Keep writing Mr. Cole and I’ll keep reading! I gave this book 4 stars but I really wanted to give it 4.5 stars!” — Maryellen

Congratulations to all the winners of the July 14th Sand Dollar book giveaway at GoodReads:

Thanks to the 1895 people who entered the drawing. If you’re not one of the winners, please check back again soon for another giveaway. If you’ve read the book, please let me know what you think. I’d love to hear from you!

Check back every week for another chapter!

Even the sky was gloomy as Noah sailed by the old, abandoned lighthouse on this cold, raw, November day. He was heavily bundled in a thick wool sweater, down jacket, wool hat, and wool gloves. The cold air added a drab shade of blue to a face reddened by the unforgiving wind. With no other boats out on the white-capped bay, Noah was utterly alone.

“It was as if the life had been sucked out of my body, and there was no happiness in the part of me that was left behind. I thought perhaps I could find God out there on the water, but he was nowhere to be found. I determined he must not exist… because it was just me… all alone.”

Congratulations to the ten winners of my June 7th Sand Dollar book giveaway at Librarything:

I hope everybody enjoys it. Please let me know what you think. I’d love to hear from you!

Twentieth Chapter: A Casualty Of Words

Robin and Noah were dining alfresco at Trattoria Simpatico in Jamestown as a jazz trio played instrumental music under an old beech tree in the background. The waiter removed an empty bottle of Pinot Grigio from the table and walked away.

“It’s no big deal. I was just thinking about what my shrink said to me the other day, that’s all,” she said, looking away.

Noah took a sip of wine. “I just don’t understand you lately,” he said, setting the glass down. “Ever since we got back from our honeymoon, you seem distant for some reason. Did I do something wrong?”

“You spend too much time on that thing as it is.”

“The boat’s not a bad thing, you know. You treat it like it’s some kind of other woman.”

“Look, just because you named your expensive yacht after me doesn’t mean I have to like it, okay?”

Noah looked at her, puzzled. “And every time I walk up to you to show you the least bit of affectionate, you walk away. You’re never interested in making love anymore. It’s not so much about the sex as it is about expressing our love for each other in a way that only intimacy can achieve. So what’s bothering you? Is it me? Is there anything I can do to help?”

Robin hesitated, took a deep breath, and spoke. “Yeah, there is something you can do to help…”

Thirteenth Chapter: The Company He Keeps

The phone was ringing off the hook as Noah lay motionless on the bed. Rosa walked into the bedroom and answered the phone on the nightstand. “Hello. Oh, hi, Mr. Hartman. Yes, Noah’s here, but he no want to talk right now. He knows it’s been two weeks since he’s been to work. He knows the budgets are past due. Okay, I tell him. Bye, Mr. Hartman.” No sooner had she hung up the phone than it rang again. “Hello. Oh, hi, Mrs. Hartman. No, Noah no want to come for dinner tonight. He still no feel good. Okay, I tell him. Bye, Mrs. Hartman,” she said, hanging up and leaving the room. The phone rang again, and Rosa could be heard speaking down the hall. “Hello. Oh, hi, Scott. No, Noah no want to talk right now. Okay, I tell him…”

“My life was not the same without Robin in it. I was depressed, and nothing could make me happy — nothing except for Robin, that is.”

Sand Dollar: A Story of Undying Love is now available for the Nook. The price is 99 cents.

“It was great sailing weather that summer, and I got to spend time with my two loves — Robin and Freedom. Now what could better than that?”

As long as you had a boat, there was always plenty to do on Narragansett Bay during the summer months in the Ocean State. Noah’s sailboat was one of a thousand boats anchored off the Quonset Point Air Force Base for the annual air show. Brittany was wearing a purple life preserver, trying to follow the dazzling display of aeronautics through a pair of oversized binoculars. Noah took a picture of Robin blowing a kiss to him just as The Blue Angels flew by with a thunderous roar.

A valet driver opened the door to Noah’s Ferrari convertible as it pulled up in front of Capriccio restaurant in downtown Providence. Inside the elegant Italian restaurant, the ambiance was warm and charming, with a cobblestoned floor, columns with decorative moldings, and tables glowing under candlelight. The pianist at the baby grand was playing The Way You Look Tonight by Frank Sinatra as Noah, holding a small gift bag, walked over to the alcove where Scott, Sharon, Miriam, and Jerry were sitting.

“Come here for a second,” she said, motioning for him to duck down.

Noah grimaced, lowering his head as Miriam proceeded to lick her hand and pat his hair down. As a tuxedoed waiter approached, Noah pulled away and sat down at the empty seat beside his brother. As the waiter made his way around the table with a bottle of Dom Pérignon, he poured Champagne into everyone’s glasses.

With a fresh coat of polish, Noah’s immaculate 1966 Ferrari pulled into Hartman Enterprises behind a beat-up, blue Mustang convertible, also a 1966 model. Noah followed the Mustang to the back corner of the lot and parked next to it. The driver, wearing a navy maintenance uniform, got out of the car and opened the trunk.

“Hey, Noah,” the man replied, closing his trunk and putting a tool belt around his waist. “Yeah, that’s because I almost never drive it. I only take it out a couple times a year, just to air it out.”

“Sweet ride,” Noah said, peeking inside the Mustang. “I like the Pony seats.”

“The chassis is kind of beat up — not refurbished like yours.”

“What are you talking about? She’s a beaut,” Noah exclaimed, walking around the car, checking it out. “Besides, I don’t look at the outside so much as I do the inside. That’s where the real beauty is,” he said, stopping at the front of the car. “Do you mind?” he said, pointing at the hood.

I received the PDF files back from the formatter last night — yay! — and immediately uploaded them to the printer/distributor, Lightning Source.

This is very exciting! 🙂

He did a great job with the fonts, colors, and overall design. I was very pleased with his formatting of the interior too, turning asterisks into little sand dollars! 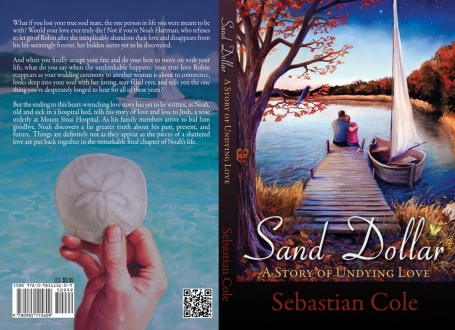 “Rachel was a complainer,” I explain to Josh, continuing with the story, “always complaining about one thing or another. She complained that I was shallow and self-centered. She complained I never listened to her, especially when it came to having enough chutzpah to stand up to my parents. Let’s see, what else… Oh yeah, she complained I was materialistic and loved my boat more than I loved her. Maybe she was right — I don’t know. In any case, it didn’t matter anymore because my lawyer had called to tell me that my divorce from Rachel was now final, and I could start dating again. But finding the right woman was going to be quite the challenge. I needed to find someone that would love me for me and not for my money. And with Internet dating, finding the right match soon became a full time job.”

“What was important to me?” I say, repeating Josh’s question. “That’s easy… LOVE.”

Look at me. Not too shabby for an eighty-year-old man, huh? I’m feeling pretty good, although I can’t seem to remember how I got here or how this bandage ended up on my forehead. I hope I get out of here soon; I’d like to go home. After all, today’s our anniversary.

I lean closer to the mirror, turning my head to the side and touching the edge of the white medical tape holding the square gauze to my forehead. Let me just pull the tape up a little bit over here and see what this looks like. I hear a knock at the door. Better get back in bed.

I scurry out of the bathroom and run back to my hospital bed, jumping in with relative ease. There’s a second knock, this time louder. “Come on in,” I say, pulling the white cotton sheet up over my hospital gown.

Of all the guests congregated inside Touro Synagogue, no one was more delighted than Miriam Hartman, mother of the groom. She was sitting in the front row with tissues in hand, her husband to her right, the bride’s mother — a close friend — to her left. If only Noah had married a nice Jewish girl like Sarah all those years ago, Miriam thought, his life would have turned out perfect, just the way she had planned. Instead, his life was ruined by that shicksa Robin he had insisted on marrying against her wishes. She and Jerry tried to nip it in the bud before it was too late, but Noah was stubborn, some nonsense about butterflies and the way she looked at him. For the life of her, Miriam could not understand why Noah never listened to his mother, because after all, she only wanted what was best for him. And at this point in Noah’s middle-aged life, Miriam concluded, Sarah was best for him. With all the bad decisions he had made throughout his life, proposing to Sarah appeared to be the only redeeming one.

Relishing in subdued victory, there was no need for Miriam to ever take credit for the role she had played in getting the two of them together. For all Noah knew, running into Sarah at the premiere of Sand Dollar happened by chance, or perhaps even divine intervention — if you believe in that sort of thing. However, there was nothing divine about it — not that time anyway — because Miriam had secretly planted her there.