There… I said it. Now it’s out there for all to see.

Calling all fans of The Notebook! In this heartrending, award-winning romance, 80-year-old Noah reminisces about the women in his life, Robin and Sarah. But which one did he choose? Over 270 five-star reviews on Amazon!

AVAILABLE THROUGH OCTOBER 7TH AT

Noah Hartman has it all, or so it seems. Groomed since childhood to inherit his family’s fortune and business empire, the effect of living the life set down for him by controlling parents has left Noah out of touch with his inner self. Enter Robin, who — in direct contrast to Noah — is a vivacious, free spirit with no material possessions to speak of. Robin’s love saves Noah by inspiring him to stand up to his parents and reclaim his true identity at all costs. But Robin harbors a secret that could devastate their lives forever. Is it enough for two soul mates to find each other, or are the forces that would tear them apart too great to overcome?

Many years later, Noah lies in a hospital bed recounting his life of love and loss, only to discover a far greater truth about the past, present, and future. And the one certainty that remains unchanged in Noah’s heart — true love never dies.

Looking for the next great love story? Look no further: read SAND DOLLAR: A Story of Undying Love!

SAND DOLLAR: A Story of Undying Love on sale for 99¢

SAND DOLLAR on Sale for 99¢

Sand Dollar: A Story of Undying Love will be on sale for 99 cents from Tuesday, March 18 through Thursday, March 20 for Amazon Kindle, Barnes & Noble Nook, Kobo, and iTunes. Get yours today! 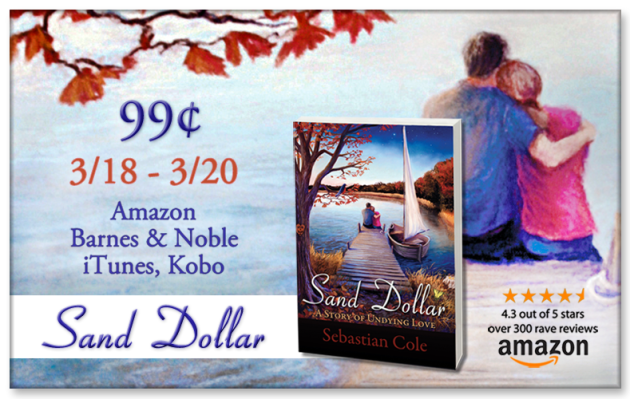 Sand Dollar is an epic, heart-wrenching love story about the “one who got away”. It is best described as a romantic fantasy, kind of like The Notebook with a Sixth Sense twist. Similar to a Nicholas Sparks novel, but uniquely different,Sand Dollar is a thought-provoking, emotional read with real life situations that might even have you yelling at the main characters at times. A mixture of joy and heartache, this realistic portrayal of life is what sets Sand Dollar apart from other romance novels.

When the story opens, Noah, who’s old and sick in a hospital bed, tells his story of undying love for his soul mate, his one true love, Robin, who also happens to be the one who got away. Told from Noah’s point of view, the story has two timelines: when he’s old and when he’s young. After plenty of twists and turns that make it hard to put the book down, the two timelines intersect with a surprising plot twist, and the story moves forward with the most beautiful of endings – an ending that you’ve just got to read for yourself!

Author Sebastian Cole is a native Rhode Islander and graduate of Brown University. Set in Rhode Island, Sand Dollar reflects over forty years of personal life experiences. A true romantic, his life is defined by following his heart and pursuing his dreams, which is why he has become a novelist. Sebastian writes from the heart, believing in true love, love at first sight, and finding that one person in life you’re meant to be with.

Sebastian Cole’s novel is currently a finalist for the Book Of The Year Award in the Romance category at ForeWord Reviews magazine, and was also a finalist in the ForeWord Firsts debut literary competition for first-time authors. Sand Dollar has a rating of 4.6 stars (out of 5 stars) on Amazon with over 75 reviews, and was recently on the cover of the March 25th issue of Publishers Weekly. The book has been getting rave reviews, many of which compare Sebastian to his favorite author, Nicholas Sparks. Whether or not he ever achieves that kind of success, touching the lives of others through his writing has been the single most gratifying thing he has ever done in his life.

“Sand Dollar is one of those rare books that makes you feel, laugh and cry all at the same time. This smashing debut by Sebastian Cole reads like the best of Nicholas Sparks with just enough schmaltz.” – Jon Land, best selling author.

Please join me and several other Rhode Island authors on Thursday, April 25th at Barnes & Noble, 1350-B Bald Hill Rd, Warwick, RI. I’ll be signing my debut novel, Sand Dollar: A Story of Undying Love, from 6:00 pm to 8:00 pm. I hope to see you there!

As part of National Novel Writing Month, I had the privilege of speaking to a group of talented, young aspiring authors this evening at Barnes & Noble in Warwick, R.I. I’m so proud of you guys! Remember to always follow your dreams. And as long as you give it your all and don’t give up, you can achieve anything you set your mind to. So keep on writing!